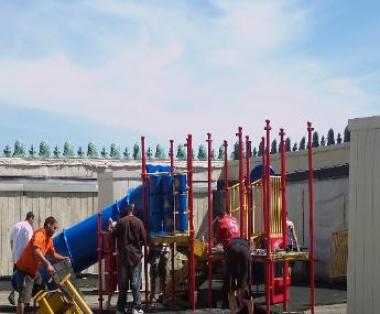 YouthBuild Students volunteer their time to dismantle the MJT playground to move it to the TLC Christian Preschool site.

When Training Resources of America was forced to close their childcare center, they generously donated the gently used playground equipment to the TLC Christian Preschool.

The equipment had been on the rooftop of their site at 332 Main Street in Worcester.

The project involved several steps and many volunteers.

The structure was disassembled by young people enrolled in the YouthBuild Program at TRA.

The young people worked in the blazing sun for a whole day. The project involved labeling all of the pieces and removing the safety surfacing. Each safety tile weighs approximately 40 pounds. There were over 200 tiles involved.

Due to weather conditions and the volunteers involved we do not have pictures of moving day. Six men from Channing House and six students from Youthbuild worked for 6 hours in the rain to move all of the tiles and equipment through the office building at 332 Main Street to a freight elevator to be loaded into a truck for transport. Those 40 pound tiles weigh significantly more when wet! At one point the freight elevator lost power. As we started moving the bulky equipment back through the build- ing and onto the roof, the elevator came alive again. We are incredibly grateful to the volunteers who worked in adverse conditions! The work was muddy, strenuous, and wet! Without their efforts we never could have completed the build for the children.

Fortunately for the volunteers who rebuilt the playground, the sun was shining that day. The morning was rather cold, however. Work gloves were used, not for protection, but rather for warmth.

We are very grateful to our funders:

We are also grateful to our many volunteers: