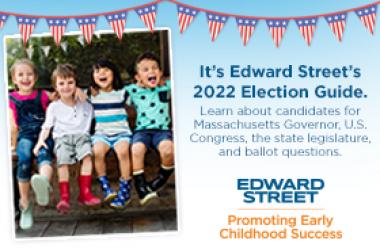 Join us in promoting early childhood success this November!

Edward Street’s 2022 Election Guide is here to show you how.

A vote for early childhood is a vote for the community

Why is Edward Street so focused on early childhood? Let us count the ways.

Millions of neurons are formed each second during the first few years of life, setting the stage for academic and professional success. High-quality early education and care even improves adult health and wellness.

Questions to ask about early childhood and what to listen for

Make sure candidates and voters are talking about early education and care on social media and at candidates’ forums. Ask questions like:

Now, on to the candidates and ballot questions! 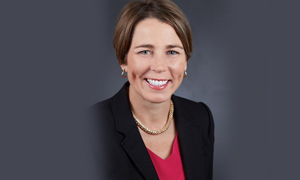 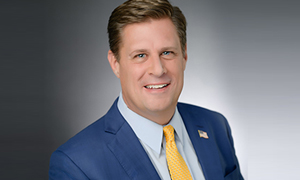 A number of statewide seats are on the ballot this November, from Governor and Lieutenant Governor to Attorney General and Secretary of State.

In the governor’s race, Republican Geoff Diehl does not mention early education and care on his campaign website and has not commented on it publicly, to our knowledge.

On the Democratic side, gubernatorial candidate and current Attorney General Maury Healy has come out in favor of targeted early childhood funding.

“Our early childhood education and care system – which is essential to the basic functioning of our economy – is in desperate need of investment. We saw what happened during this pandemic to our child care system – children suffered, parents couldn’t go to work, and businesses and the economy struggled,” says her campaign. “As Governor, [Maura] will continue to advocate for federal funding for early education and care, as well as explore state solutions to the child care crisis.”

To learn more about these candidates and candidates for Attorney General, Secretary of State, and more, search for their websites and news sources online. You can find their names here. 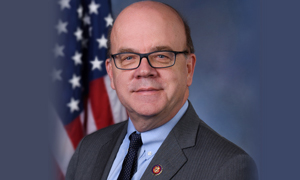 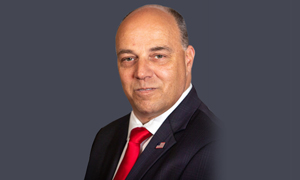 McGovern, currently serving his 12th term in Congress, “continues urging House leadership to provide robust funding” for programs such as Reach Out and Read, Head Start, and the Child Care Development Block Grant. He has also “led the fight to strengthen school lunch programs, understanding that school meals are as essential for our children’s ability to learn as any textbook.”

Sossa-Paquette, McGovern’s challenger, has first-hand experience in the childcare field as an owner-operator. Rather than increased funding, he favors a shift in how current childcare dollars are being spent. “Agencies like EEC (the Massachusetts Department of Early Education and Care) must work better with actual program providers and daycare providers,” he says. “Programs need to meet local community needs, not a one-size-fits-all approach from the federal and state governments.”

Several other seats are on the ballot as well. See the full list here.

Worcester District candidates for the Massachusetts legislature and more

Massachusetts State Senate and Congressional candidates are also squaring off this November, as well as candidates for District Attorney, Councillor, and Sheriff.

Ballot questions to be aware of this November

Three out of four ballot questions will impact children and families directly.

Question 1: Proposed amendment to the state constitution to create an additional tax on income over $1 million.

A “Yes” vote on Question 1 supports a 4% state income tax on income earned in excess of $1 million. Revenues would be used, subject to appropriation by the state legislature, for public education, public colleges and universities, and for the repair and maintenance of roads, bridges, and public transportation.

Although early education and care is not specifically mentioned, education funding will support Worcester-area families overall, and Edward Street hopes legislators will make childcare a priority.

Those in favor of voting “Yes” on Question 1 argue that the state’s current tax rules, which allow multimillionaires to pay a smaller share in taxes than individuals in other tax brackets, should be changed.

A “No” vote on Question 1 supports no change to the state’s income tax. Those urging a “No” vote say a rate hike will negatively impact employers and retirees.

A “Yes” vote will regulate dental insurance rates by requiring companies to spend at least 83% of premiums on member dental expenses and quality improvements.

Proponents say corporate executives are pocketing more than their fair share. (For example, according to its own 2019 Form 990 taxes, Delta Dental spent $382 million in executive bonuses, commissions, and payments to affiliates in Massachusetts alone, while targeting $177 million for patient care.)

A “No” vote on Question 2 would make no change to state law relative to the regulations that apply to dental insurance companies. Critics of Question 2 say it will increase costs for Massachusetts families and employers and could result in decreased access to dental care.

A “Yes” vote on Question 4 will keep in place an existing law that allows Massachusetts residents, regardless of their immigration status, to obtain a driver’s license or permit.

A “No” vote on Question 4 will repeal this law. Critics say the Massachusetts Registry of Motor Vehicles does not have the ability to verify documents from other countries. They say the bill is unfair to those who have taken the time to immigrate to the United States legally.

Vote early or vote on November 8th. Vote in-person or by mail

It’s easier than ever to vote in Massachusetts.

You still have time.

Register online, by mail (find options for non-English speaking individuals here), or in-person. Mail-in registrations must be postmarked October 29th or earlier. In-person or online registration must be completed by 5 p.m. on October 29th.

Now, get out and vote this November and ask your friends and neighbors to do the same. Children are counting on you!

Edward Street is proud to support high-quality early learning and care. Donate today so children, families, and businesses can thrive, and follow us on Facebook and LinkedIn.