Local educational consultant to offer free mindfulness classes for after-school program staff. She tells us why 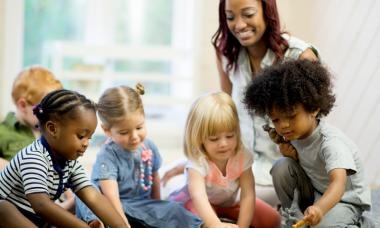 Local educational consultant, author, and public speaker, Wendy O’Leary, M.Ed., says that when educators and parents practice mindfulness for any amount of time, children in their lives reap the benefits.

“Research shows improvements in behavior and academics, even without actually teaching mindfulness to children themselves,” she says.

In partnership with Edward Street and the Boys & Girls Club of Worcester, O’Leary is preparing a free, six-week mindfulness program for out-of-school time providers serving children ages pre-K through third grade. Funding was provided by the state’s Department of Elementary and Secondary Education. (Registration information, dates, and times will be announced on Edward Street’s social channels. Stay tuned on LinkedIn.)

The program will help participants establish mindfulness practices for themselves and strategies for teaching mindfulness to children.

O’Leary, author of a pair of mindfulness books for young children, Breathing Makes it Better, and the forthcoming The Monster Parade (due out February 22nd), likens mindfulness to a peaceful eddy in a body of turbulent water. “You have an opportunity to calm yourself, be still, and become more present for young children and colleagues.”

Not surprisingly, in fast-paced education and care environments, staff are reluctant to carve out moments for self care. Says O’Leary, ”They feel like they’re being selfish or giving up, or they literally don’t have time.”

Tips and techniques for developing a consistent mindfulness practice

Educators and parents can build daily habits such as periodically noticing their breath coming in and going out; feeling their feet on the floor as they walk around a room bustling with young children; or simply pausing and listening for a moment.

“We think of self care as the spa day, but it can be just one second of presence at various times throughout the day,” says O’Leary.

Consistency is key. The more we practice mindfulness, the more we feel supported by it, which positively affects children’s social-emotional development and resilience.

“We co-regulate with children whenever we’re with them,” says O’Leary. “If things start to become chaotic, they’ll react to that, but if we stay calm, they’ll learn to mimic that behavior instead.”

Edward Street is proud to support early childhood success through initiatives such as free mindfulness classes for early educators. Follow us on Facebook and LinkedIn to learn more.