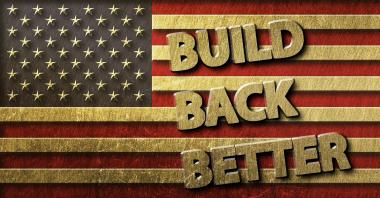 It was in the early 20th century when the United States made 12 years of public education a universal right. Last month, nearly 100 years later, President Joe Biden proposed an additional four years of coverage for early education and care, as part of the American Families Plan.

The Biden Administration’s proposal is a great start; however, it’s just that. A start. Decisions need to be made regarding public-private partnerships, financing and much more. Yet, the American Families Plan is yet another sign that the timing is right to make history in Massachusetts.

Our own proposal for universal, affordable early education and care, known as the Common Start Legislation, has been co-sponsored by a majority of state legislators and is expected to be voted on within the next year and a half.

As with universal, affordable healthcare during the Obama administration, which was modeled, in part, after Massachusetts’ own “Romney care,” Massachusetts has an opportunity to act as a national leader. Additionally, should both proposals be adopted as law, federal dollars would help finance and support the Common Start Legislation.

High quality childcare has been shown to positively affect children throughout their academic lives and into adulthood. By making it a universal right, Massachusetts and the nation may begin to address historical, racial, and economic inequities that have hindered upward mobility for generations.

As President Biden said, “The great universities in this country have conducted studies over the last 10 years,” he said. “It shows that adding two years of universal, high-quality preschool for every 3-year-old and 4-year-old, no matter what background they come from, puts them in the position of being able to compete all the way through 12 years and increases exponentially their prospect of graduating and going on beyond graduation.”

Additionally, the president quoted the first lady, Jill Biden, in making the case that early education and care is a matter of national importance. “Jill is a community college professor who teaches today as first lady. She’s long said, if I heard it once, I’ve heard it a thousand times, ‘Joe, any country that out-educates us is going to outcompete us.’”

It remains to be seen how universal early education and care will take shape nationally, but we have an opportunity to control our own destiny right here at home—and it’s an opportunity that won’t last forever. Let’s make universal, affordable childcare a reality in Massachusetts, and help lead the country towards a stronger economy and a better future for all.

Learn more about the Common Start Legislation, share your childcare story, and ask your state legislator to support young children, families and the economy!