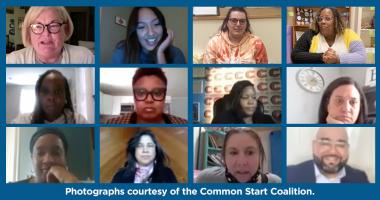 The numbers simply don’t line up.

In Massachusetts, a livable wage—the hourly rate that an individual must earn to support his or herself and their family—is $17.74 per hour. And that’s just for single people without children. For a single parent with one child, the number rises to $36.88; for couples with two children, $47.64 an hour is needed.

Early educators in the state, however, earn an average of just $16.23 per hour.

The problem has only gotten worse due to the pandemic. Childcare programs face even greater competition from corporations, which have the spending power to offer higher wages and starting bonuses. (The starting pay at McDonald’s is now higher than the average pay for all early educators.)

It’s not as if childcare isn’t desirable work.

Women in particular are drawn to the profession, including many who earn bachelor’s and master’s degrees in early childhood, only to find the career itself unsustainable. Ironically, women who are mothers themselves can rarely afford to work in childcare because their salary won’t cover the cost of childcare for their own children. (Help may be on the way: a pandemic waiver allowing programs to offer childcare discounts to employees may be extended by the state’s Department of Early Education and Care.)

Staffing shortages and high turnover have significant repercussions. At a time in their lives when they need it most, young children are left without consistent, high-quality learning and care, which negatively affects future academic performance and professional success. There’s no questioning the importance of elementary and secondary education, but early childhood also deserves support and investment; learning happens on a continuum, beginning at birth.

Fortunately, the country and the state of Massachusetts are beginning to take notice. Massachusetts’ own Common Start Legislation would help improve educator pay by providing bedrock funding for childcare programs. If it passes, educators like Agnella G. might not need to work second and third jobs, or leave the profession altogether.

Agree with Agnella? Join us in supporting the Common Start Legislation! Visit commonstartma.org to learn more, share your childcare story, and let your state legislator know where you stand.