A Conversation with Robyn Kennedy 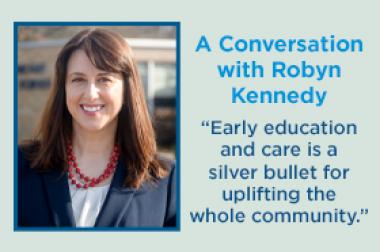 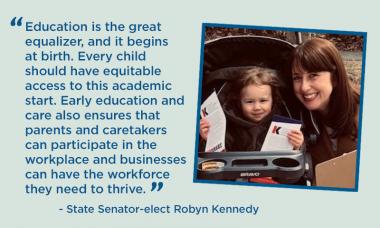 Elected by First Worcester District voters to fill the seat of retiring State Senator Harriet Chandler, Kennedy is eager to tackle complex issues. In the wake of the pandemic, she believes Massachusetts is ready for change.

“I’m excited to uplift the work that’s happening here in our community and the solutions that we’ve built,” she says. “The pandemic spawned new collaborations and solutions, and I can’t wait to work with the community and my colleagues in the Legislature to build these strategies into long term solutions.”

Voters and legislators understand the role of childcare more than ever

The needs of young children and families are now better recognized, and solutions may be on the way.

“The pandemic shined a bright light on the early education and care field, and it’s my job to make sure that light doesn’t dim. It proved how essential this work is to not only children but workers and businesses, and I saw it firsthand,” says Kennedy of early educators’ COVID response. “Our educators showed up every day. Providers cared for children throughout the pandemic. They cared for the children of doctors and nurses, so those doctors and nurses could treat patients, including an influx of COVID patients. Without early educators, the economy would have broken down.”

Momentum has been steadily building for months. Now, Kennedy and her soon-to-be colleagues are poised to implement significant change, including through a comprehensive omnibus bill.

“The legislation passed by the Senate last session, largely informed by the Common Start Coalition, is the right bill and the right step forward. I look forward to working with the Senate and my colleagues in the House to move legislation forward in the next session.” she says.

Kennedy is also eyeing the permanent adoption of temporary, pandemic-era fixes, including enrollment-based reimbursements for childcare providers. Under Massachusetts’ attendance-based system, reimbursements fluctuate because of unpredictable events such as illness. This hampers curriculum development and providers’ bottom line—many have  been forced out of business or forced to reduce capacity, resulting in childcare deserts and gaps.

“There’s a lot we can do to make early education and care more affordable and accessible, that begins by investing in our providers and educators as a top priority,” she says.

Statewide political experience has shown collaboration will be key

Kennedy’s influence on early education and care legislation will depend in part on her committee assignments, but regardless of her assignments, collaboration will be key.

“What my career has helped me understand is that there is so much more that can be done legislatively, but it’s also about working in partnership with our community leaders and with state agencies,” she says.

Kennedy’s political work began with an internship in Congressman Jim McGovern’s office. She later joined McGovern’s re-election campaign, and the office of State Senator Ed Augustus. In 2006, after working on the campaign to elect Governor Deval Patrick and Lieutenant Governor Tim Murray, she was named Deputy Director of Appointments.

She later worked in the Lieutenant Governor’s Office as a Director of Policy and Interagency Initiatives, Deputy Chief of Staff, and Deputy Assistant Secretary for Children, Youth and Families.

Most recently, Kennedy served as Chief Operating Officer at the YWCA of Central Massachusetts, which operates childcare programs for children ages 3 months to five years old. The benefits of early learning and care were obvious, including for her own niece, a current YWCA student.

“We were able to see growth in her language capacity and her ability to interact and socialize, and she’s now equipped to meet academic challenges,” she says. “Every child deserves this kind of start but there aren’t enough slots available to meet families’ needs.”

This has to change, says Kennedy—for all of us.

“Education is the great equalizer, and it begins at birth. Every child should have equitable access to this academic start. Early education and care also ensures that parents and caretakers can participate in the workplace and businesses can have the workforce they need to thrive,” she says. “It’s a silver bullet for uplifting the whole community.”

Let’s make a difference together. Donate today to support the fight for universal, affordable childcare in Massachusetts, and follow Edward Street on Facebook and LinkedIn.